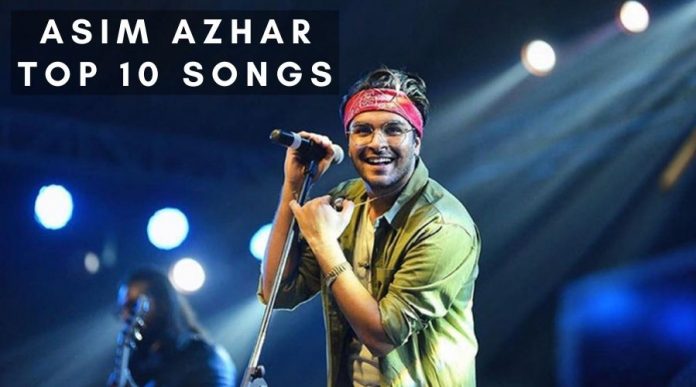 Asim Azhar is the most successful and talented singer of the fresh, new music lot in Pakistan with garnering massive success in a short period of time.

Asim Azhar has become the most in demand singer as his diverse style allows both dramatic yet emotional and high energy songs to be performed with perfection.

He became popular because of his songs recorded in Coke Studio 9 and rules the music industry today with his numerous songs, both originals and renditions.

He started his career as a singer on YouTube, re-singing contemporary Western songs before he became an iconic public figure.

So here is a list of 10 songs of the singer that you must listen to:

The drama that gave us one of the most sizzling chemistry on-screen this year was the mega hit serial Ishqiya that featured Hania Amir, Feroze Khan, Ramsha Khan and Gohar Rashid as leads. The OST is composed and singing by the Famous Pakistani singer Asim Azher and the powerful vocals gave a the emotional feel to the drama that it required.

Putting Asim Azhar literally on the music map of the world was this rather controversial yet spectacular rendition of “Tera Who Pyaar” which became the romantic anthem in 2016. The song was part of Coke Studio’s latest playlist and brilliantly performed by Asim Azhar and Momina Mustehsan.

Fan favourite “Ehd-e-wafa”, the hit Pakistani drama series which revolves around relationship of four childhood friends and focuses on an individual’s relationship to his country made many eyes teary. And the drama had been coupled with the perfect OST that complimented the powerful story. It was sung by superstars Ali Zafar, Asim Azhar and penned by Imran Raza.

Releasing his own song from his latest album, Soneya is a fresh song and this heartbreak anthem is written by Kunaal Vermaa & composed by Asim, himself. This futuristic looking song was released during lockdown amidst corona virus and became a must on everyone’s playlist.

With the film starring Disha Patani and Aditya Roy Kapur in leading roles, Humraah marks Asim Azhars debut in Bollywood. Although Azhar had written and composed the song, he was not allowed to use his vocals at the time, and Asim was replaced with a version sung by Sachet Tandon. Later Azhar released the song in his voice on his YouTube channel.

Azhar was part of the official PSL anthem Tayyar Hain, along with legendary singers like Ali Azmat, Arif Lohar and Haroon. The high energy song was given a young energy with Asim Azhars vocals.

Famous singers including Ali Hamza, Ali Azmat, Ali Noor & Asim Azhar released a new song in collaboration with ISPR to celebrate Defence Day. The singer line up for the song is very dynamic as Ali Azmat brings the electric fervor into the mix while Asim Azhar brings the young energy and finally Ali Noor of “Noori” brings the fresh spirituality to the song.