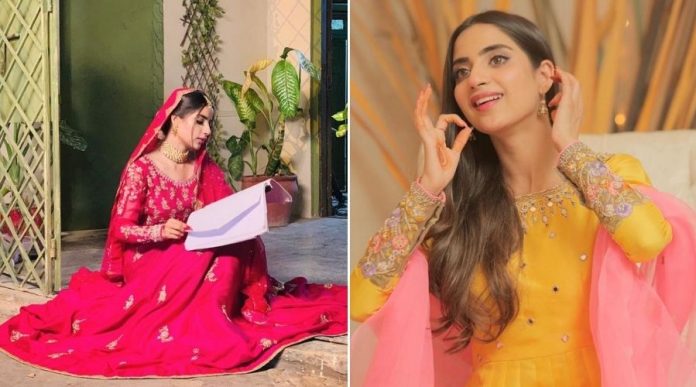 After giving stellar performance in her role in ‘Gul O Gulzar’ which brought Saboor Aly out of her comfort zone and it has proved that she can do more than just the stereotypical roles, the starlet has went on to score more amazing performances. And now we will see Aly in the leading role in Anjum Shahzad’s next drama serial on ARY Digital.

Titled “Mujhe Wida Kar”, the star shared her look in the drama with this snap:

Wearing a beautiful ensemble by Haris Shakeel, Saboor looks breathtaking while preparing for her role in the drama serial.

Though the actress is known for being the younger sister of the superstar, Sajal Aly, but she has managed to grow out of her sister’s shadow and make a name for herself with back to back powerful performances. After her amazing performance in Gul o Gulzar and an emotionally charged one in Naqab Zan, the actress Saboor Aly is dazzling fans once again as the leading lady in yet another project “Tum Ho Wajah,” which is on air on HUM TV these days.

In the year 2016, she made her debut opposite Fahad Mustafa in the comic drama Actor in Law, which became one of the most successful films of Pakistani cinema after its release.