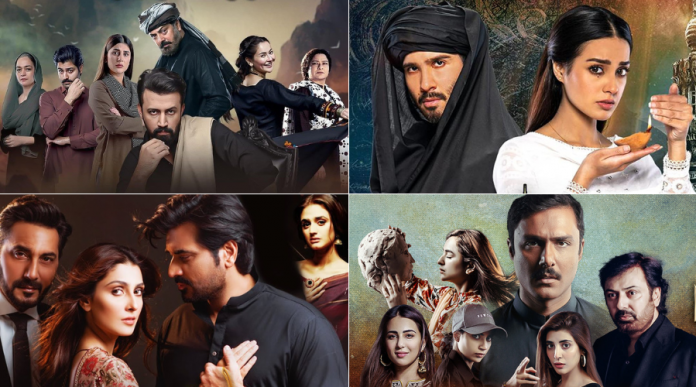 Almost every Pakistani drama these days has a very unique theme and sheds light on very serious and common issues in our Pakistani society which makes it even more interesting for the viewers. However, there are certain new trends in our industry such as stretching dramas especially when they get the ratings which definitely make it difficult to add such dramas to this list.

That’s why, in today’s list, we will include only those Pakistani dramas which were the most engaging and entertaining as well as meaningful, well-written, and acted out superbly.

Mere Pas Tum Ho, Hands down, the drama serial has been probably the best serial in Pakistani drama history. The drama serial has broken many viewership records and its still growing day by day.  The drama is written by Khalil-ur-Rehman Qamar and directed by Nadeem Baig  The main cast of the drama includes Ayeza Khan, Humayun Saeed, and Adnan Siddiqui and, Hira Mani. The drama has a very heartbroken storyline about a husband and his wife. The drama is heavily appreciated by viewers all around the world and it definitely deserves first place.

Sang-e-Mah is Directed by Saife Hassan, was written by Mustafa Afridi and produced by Momina Duraid Productions.  The drama shows a family who is living in a tribal area of Pakistan and is forced to make sacrifices because of the people and their traditions. The drama also shows the bitter reality of the oppression of women in the tribal areas of the country. Another reason why the serial is so popular is that our favorite singer, Atif Aslam has made his acting debut with this serial. The singer was last seen in an acting project way back in 2011 in a Pakistani movie ‘BOL.’

Khuda Aur Muhabbat, starring our favorite Iqra Aziz and Feroze Khan has broken all previous records. The drama serial has been an absolute hit in 2022 for its amazing direction, fantastic storytelling, and acting. The drama is written by the same novel writer Hashim Nadeem, directed by Syed Wajahat Hussain, and produced by Abdullah Kidwai and Asad Qureshi.

This drama is the third season of the Pakistani spiritual-romance series Khuda Aur Mohabbat. Although the story of the drama has been the same as the second season but the way they portrayed it this time has won everyone’s heart.

The story of the drama is about 7 strong girls who all have come from very different backgrounds, but fate brought them together after they joined the army which changed their lives forever!

How can we forget our favorite Parizad? It’s like the most watched and loved drama of 2022. The drama is directed by Shahzad Kashmiri and written by Hashim Nadeem.

The story revolves around the character Parizaad, who is a common man, belonging to a very poor family, has a dark skin tone, and is consistently rejected by society. However, he is very loyal, truthful, and passionate about his studies. The story takes a very interesting turn when he leaves his city to make money and starts a new job as a driver for a very rich businessman, but he turns out to be a Don.